With a new antibody that binds even the smallest and most dangerous clumps of the beta-amyloid protein that attack the brain during Alzheimer's disease, researchers at the Faculty of Pharmacy hope to enable treatments that will halt the course of the disease.

During Alzheimer's disease, the amyloid beta protein aggregates into clumps that damage the brain's nerve cells and cause impaired memory. Although the disease was described already in 1906, healthcare still lacks effective treatments. Now, researchers at Uppsala University are presenting a specially designed antibody that binds at least 40 times stronger to the harmful aggregates than previously known antibodies. In addition, the new antibody binds to the smallest clumps, by many experts considered to be the most dangerous. 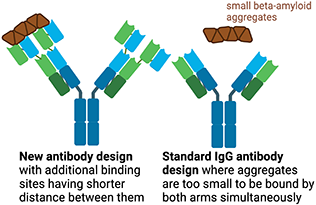 “Other antibodies that are tested on patients bind relatively strongly to larger clumps, but hardly at all to the small clumps that are equally toxic and more mobile. This is due to an excessive distance between the two arms of the antibody that it uses to it bind aggregates. Thus, we have developed a new antibody format with shorter distance between the arms, and the results are fantastic,” says Greta Hultqvist, Senior lecturer and Associate Professor in Protein drug design.

To bind to an aggregate, the antibody must bind with both arms at the same time. If the clump is smaller than the distance between the arms, they tie very weakly. The new antibody presented at the Faculty of Pharmacy has - in addition to shorter distance between the arms - also more binding sites, which contributes to an even stronger binding to amyloid beta clumps of all sizes. The results also indicate that the new antibody format can save cells from the cell death caused by the aggregates, and thus halt the course of the disease.

“Our results indicate that this new format is more effective than the antibodies that have previously reached clinical trials. The fact that antibody design is also general leads us to believe that our model in a long-term perspective can contribute to better treatments for other diseases where proteins start to form aggregates, such as Parkinson's,” says Fadi Rofo, PhD student at the Department of Pharmaceutical Biosciences.

Already in autumn 2020, the research team launched a new protein transporter with the capacity to take the peptide hormone somatostatin into the brain, where it activates the body's breakdown of amyloid beta, which in turn stop and reverse the development of Alzheimer's disease in mice.

“We see how the somatostatin remains active in the brain for several days, and after five days of treatment, we measure a reduction of 25 percent of the toxic aggregates, including the smallest amyloid beta clumps. We identify the most obvious effect in the hippocampus, the part of the brain that creates memories and is first to be attacked during Alzheimer's disease. Thus suggesting that this method has a specific outcome with few side effects. Somatostatin works in the same way in humans as in mice, but before we take that step, we must modify our protein transporter. Here we continue our work with very promising results,” says Greta Hultqvist.